Another excellent year for Willans in Chambers UK 2021 edition 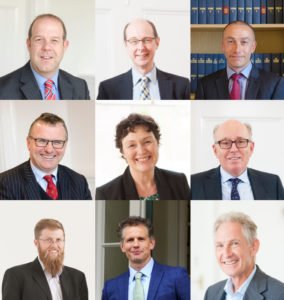 The 2021 edition of independent guide Chambers UK – recognised globally as a guide to the best law firms and lawyers – has just been released, and we are celebrating a high number of ranked lawyers and departments.

We have retained a top-tier ranking for family law in the 2021 guide, for the sixth year running. 4 additional department rankings are ranked in the guide, with 7 individual lawyers recommended in the guide.

Making a reappearance in the 2021 edition in the South West region is the firm’s litigation and dispute resolution team, led by partner Paul Gordon, which offers particular expertise in intellectual property disputes and partnership disputes. An interviewee in the guide describes the team as “clear in its feedback and insights and what course of action to take”.

Once again recommended across the whole of the South West, Willans’ “sought after” corporate team are praised by a client in the guide for being “responsive, helpful, thorough and efficient.” Department head, partner Chris Wills is commended for his “notable expertise in the renewable energy sector”, while fellow partner Paul Symes-Thompson is described as a “strong lawyer with a good presence in this market.”

Willans’ agriculture & estates team are described by a client in the guide as “approachable and grounded solicitors who offer a good range of specialisms.” The team, which advises landowning clients on a wide range of agricultural issues, including complex succession planning and asset protection matters, is led by “notable practitioner” Robin Beckley, whose “wealth of experience” is noted in the guide.

Securing a coveted top-tier ranking for the sixth year running, Willans’ divorce & family law team is well-respected for its advice on financial remedy and private children matters. Highlighted as a ‘notable practitioner’, senior associate Jonathan Eager is praised by a client in the guide for being “reliable and confident…a good lawyer and dedicated to clients”.

The commercial property team, which handles a wide range of development, investment, and landlord and tenant work, is noted for its “extensive expertise in advising charities on their property needs. A client quoted in the guide says “the team responds quickly and effectively and gives pertinent advice in a timely fashion.” Department head, partner Nigel Whittaker, is once again named a ‘notable practitioner’, described as “very helpful in thinking through issues and coming at things from different angles which I may not previously have considered.”

Also recommended as a notable practitioner in the guide is employment law partner Matthew Clayton, who is noted for his expertise in complex tribunal cases, data protection, TUPE and redundancy matters, with a source describing him as “extremely personable, helpful and efficient.”

The news comes after our private client and inheritance & trust disputes teams were rated in Chambers UK’s sister publication, Chambers High Net Worth, in which respective department heads Simon Cook and Paul Gordon were both named as notable practitioners.

Managing partner, Bridget Redmond, commented: “This is an excellent set of results for us, with a consistently strong number of ranked lawyers and departments. I’m pleased to see Willans ranked on a par with some significantly larger South West firms; our goal is always to deliver the technical expertise and quality of legal service that you’d expect from a regional heavyweight firm, whilst placing a firm emphasis on first-class client care, responsiveness and approachability.

“These rankings, which are based on independent, objective client feedback, show that our lawyers are consistently hitting the mark. I am really proud of all those who have been noted as key contacts and notable practitioners, and their respective departments.”

Chambers and Partners is comprised of an international team of over 170 researchers who conduct rigorous, objective interviews to obtain independent feedback from clients and other firms’ solicitors.